Diet culture is everywhere, but we can change that for ourselves and our kids.

Here are Sue’s Do’s and Don’ts for raising kids to have a positive relationship with food as seen on national TV.

Looking for a media ambassador or spokesperson for your brand? Contact us! 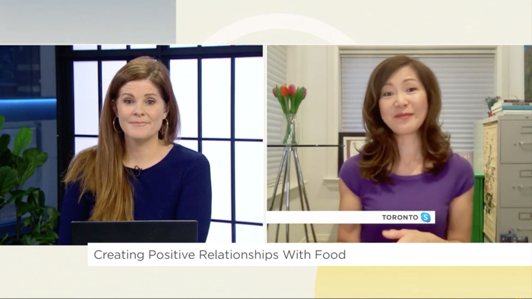 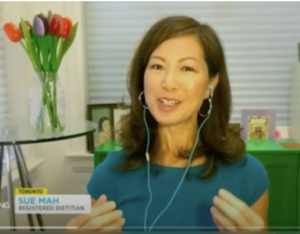 Natural versus organic. Free run versus free range. Made in Canada versus Product of Canada. These terms can be oh-so confusing! We decipher these terms so that they all make sense!

Watch Sue’s TV interview on this topic (and see a few food examples) or read the details below.

Whole grain means that you’re getting all three parts of the grain kernel or grain seed. The three parts are:

On the other hand, multi-grain simply means that the product contains more than one type of grains, and they may or may not be whole grains.

Choose whole grains when you can for extra fibre and nutrition. Some examples of whole grains are oats, barley, corn, rye, brown rice and quinoa.

These are terms that are sometimes used to describe the beef you can buy. All cattle eat grasses and forages which includes grasses, clover and alfalfa.

Grass fed beef means that the cattle was only fed grass or forages their entire life.

Grain fed beef means that the cattle were raised on grass or forages for most of their life and then grain finished. This means is that about 3-4 months before going to market, the cattle are fed a diet that is mostly grains like corn or barley. The grain helps to produce a more marbled quality grade of beef

These are terms that are used to describe the eggs you buy.

Free run eggs come from hens that roam the entire barn floor, and some of these barns may have multi-tiered aviaries.

Free range eggs come from hens that also roam the entire barn floor. And when the weather permits, the hens go outside to pasture. So in the winter when it’s cold, access to outside may be limited.

From a nutrition point of view, there are no differences in the nutritional content of these eggs compared to regular eggs. All eggs are a super source of protein, iron, vitamin B12 and vitamin D.

Made in Canada versus Product of Canada

Made in Canada means that a Canadian company was involved in some of the food preparation.

Natural means that nothing has been added or removed. The food does not contain any added vitamins or minerals or artificial flavours or food additives. The food also has not had anything removed or significantly changed.

Organic refers to the way foods and ingredients have been grown and processed. For example, organic chicken means that the chickens were raised with a certified organic feed that contains no animal by-products or antibiotics. Organic also means that there are no artificial colours or flavours, no preservatives or sweeteners. The “organic” logo, shown below, can be used only on products that have 95% or more organic content.