You may have seen the recent media headlines about a study looking at drinking milk and its impact on breast cancer risk. It’s easy to get caught up in the news. But with any nutrition research, it’s important to read it with a critical eye and ask yourself a few important questions before jumping to conclusions.

Question #1 – Did the study involve humans, animals or cells in the lab? Who were the participants and how many? How long was the study?

Human studies are always the most applicable. This study looked at almost 53,000 adult women across North America. The average age of the women was 57 years and they were all initially free of cancer. The study lasted almost 8 years.

Question #2 – What is the source of the study? Was it published in a reputable, peer-reviewed journal? Was it preliminary research that has yet to be published?

This study was part of the large Adventist Health Study-2 and published in the International Journal of Epidemiology, which is a peer-reviewed journal. Researchers were from the School of Public Health at Loma Linda University in California.

Question #3 – How was the study designed?

The study design has a big impact on the type of conclusions that can be drawn. This study about milk and breast cancer was an “observational” study meaning that researchers observed participants’ diets, collected data and then came up with a summary of their observations 8 years later.

The problem with observational studies is that we can’t make strong conclusions about cause and effect – in other words, we can’t say with certainty that “A causes B.” We can really only say that “A may be linked to B.” This is a big limitation of observational studies. A better study design would be “experimental”. In an “experimental” study, researchers randomly ask the participants to either undergo treatment A (such as drinking milk) or not undergo treatment A (such as not drinking milk), compare the results, and then see if treatment A causes outcome B (such as an increased risk of breast cancer). Of course, ethics are highly considered ahead of time, and the study needs to include a good number of participants for a decent duration. The advantage with experimental studies is that conclusions can be made about cause and effect.

Also, this study left out some important factors that could have affected the results. For example, the women were only asked if they ever smoked and how long they’ve used alcohol. The researchers didn’t ask for the amounts of tobacco smoked or the amounts of alcohol consumed. In addition, only “vigorous physical activity” was considered, not moderate physical activity (which might be more realistic) or even total minutes of physical activity. Social determinants of health weren’t considered either – like income, education or employment – and we know that these can all affect one’s health and risk for chronic diseases.

Question #4 – How was the nutrition information collected?

This study used self-reported food frequency questionnaires and 24-hour food recalls. In other words, participants told researchers how often they ate certain foods as well as what foods / beverages they consumed in the last 24 hours. There are a few problems with this type of data. First of all, this information was only collected ONCE, and at the beginning of the 8 year-long study. One has to ask if the participants ate exactly the same way years later? (Think about your own diet – has it changed over the last 8 years?) Secondly, self-reported data isn’t entirely accurate since it’s easy to under-estimate or over-estimate the amounts of food eaten. (Can you remember what and how much you ate yesterday or the day before?) And finally, a 24-hour food recall may have been taken on an “off” day, such as a weekend – which may not be an accurate picture of your true dietary intake.

Question #5 – How were the results interpreted?

This question is a bit tricky but crucial to the overall interpretation of the research. The researchers found that as milk intake increased, so did the risk of breast cancer. One news story stated that “women who drink as little as one cup of dairy milk per day could increase their risk of developing breast cancer by up to 50 per cent.” While this sounds alarming, we need to look at the statistics a bit closer.

At the end of the study, 1,057 women out of the 53,000 women developed breast cancer – this is a risk of 2% or 2 cases per 100 women. When women drank 1 cup of milk, their chances of developing breast cancer increased to 3% or 3 cases per 100 women. The difference is 1% and this is called the “absolute risk”. Since the risk of breast cancer went up from 2% to 3%, the overall increase is indeed 50% and this is called the “relative risk”. So while 50% sounds like a big number, the more important and more relevant number for YOU is the absolute risk which is only 1%.

Question #6 – What are other credible authorities saying about this topic?

Dietary guidelines are shaped by evidence-based studies, not just a single study. Always check to see what other credible, professional authorities are saying about the topic. When it comes to preventing cancer, both the Canadian Cancer Society  as well as the American Institute of Cancer Research recommend eating whole grains, vegetables, fruit, beans and lentils as a major part of your everyday diet. Sounds like great advice to us!

As always, feel free to reach out to us if you’d like our help in translating the science of nutrition into easy to understand, practical advice.

Ever wonder what the difference is between these two tiny seeds? 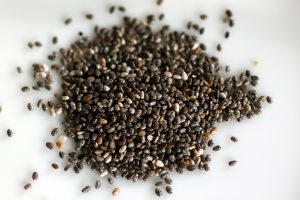 Chia seeds are tiny white or black seeds that look like poppy seeds. They were first cultivated by the Aztec tribes in Mexico.

Flax seeds are flat, yellow or brown, oval shaped seeds that are about the size of a sesame seed. Brown flax seeds are grown right here in Canada, mainly in the western Prairies.

Chia seeds are filled with insoluble fibre. When mixed with water or fluids, chia seeds expand and swell to form a gel. Chia seeds are a source of heart-healthy plant-based omega-3 fats, calcium, iron, magnesium, zinc and selenium. When it comes to fibre, calcium and selenium, chia seeds win over flax seeds. (See comparison chart below.) Studies show many benefits to including chia seeds as part of a healthy diet, such as a reduction in blood cholesterol levels and the prevention of constipation.

Note: Chia seeds can thin your blood, as well as interact with medications and blood thinners such as Warfarin/Coumadin. If you are taking any types of these medications or any type of blood pressure medications, then please avoid chia seeds and talk to you doctor.

Flax seeds are hailed as a super source of plant-based omega-3 fats which is an important nutrient to help lower the risk of heart disease. With a similar nutrition profile to that of chia seeds, flax seeds are also a source of zinc and selenium, and a good source of magnesium. Flax seeds are one of the best food sources of lignans, which are a type of plant-based estrogen. Research suggests that these lignans may play a role in protecting against breast cancer. 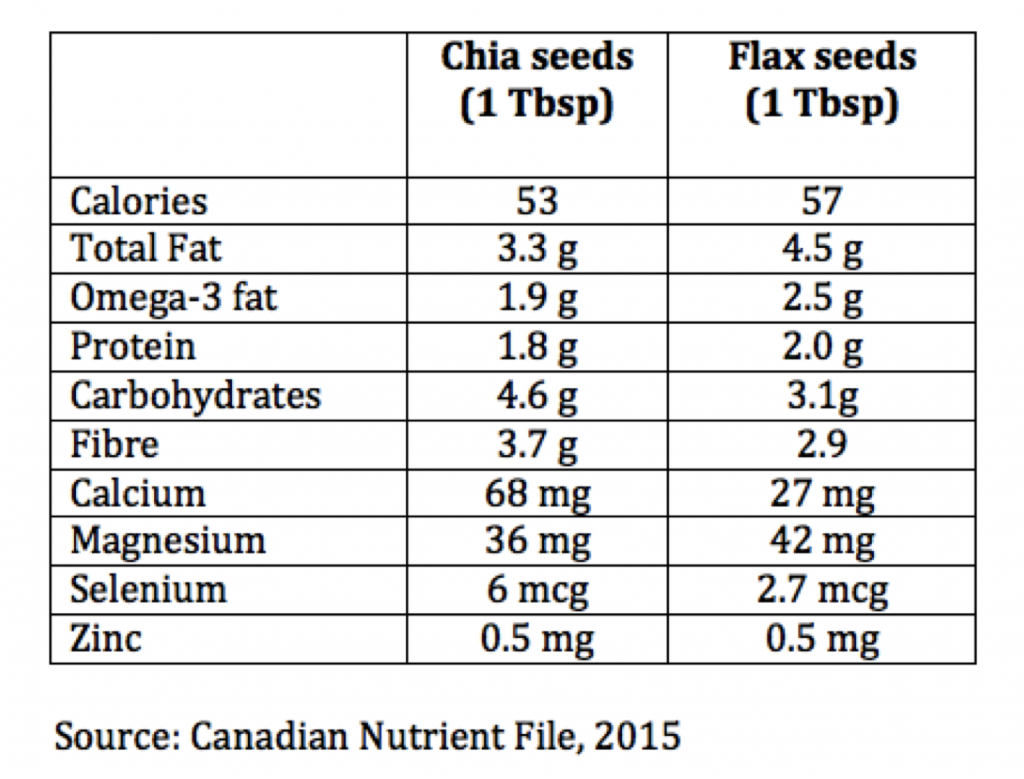 How to include in a healthy diet:

Both chia seeds and flax seeds have a nutty flavour and can be easily added to your favourite dishes.

Dietitian’s Tip: Enjoy a variety of foods and include chia seeds and/or flax seeds when you can. Leave us a comment and tell us how you love to use chia and flax!